Network analysis offers a perspective of the data that broadens and enriches any investigation. Many times we deal with data in which the elements are related, but we have them in a tabulated format that is difficult to import into network analysis tools.

Relationship data require a definition of nodes and connections. Both parts have different structures and it is not possible to structure them in a single table, at least two would be needed. Data analysis tools define different input formats, one of them is GDF, which is characterized by its simplicity and versatility.

In this session, we will see how we can extract the relationships between elements of a file in CSV format to generate a file in GDF format to work with Gephi.

One of the most used network analysis tools is Gephi. It is a desktop application that allows us to analyse a network in depth and visualize it. It provides a set of functions to filter nodes and edges or calculate network parameters or apply different layouts or give size and colour to nodes depending on different attributes.

Gephi supports a set of formats with which it is possible to perform more or less functions. The format with more features is GEXF but it has an XML structure that generates large files. When we work with very large graphs, size matters. The GDF Format is simple, compact and versatile. It allows us to work with attributes that are a complement that can be combined with the analysis of the topology of the network. 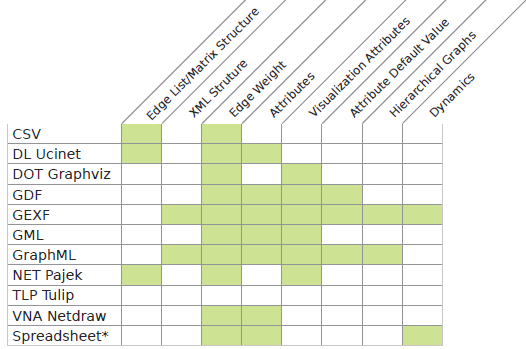 GDF is built like a database table or a coma separated file (CSV). It supports attributes to both nodes and edges. A standard file is divided in two sections, one for nodes and one for edges. Each section has a header line, which basically is the column title. Each element (i.e. node or edge) is on a line and values are separated by coma. The GDF format is therefore very easy to read and can be easily converted from CSV.

This is a basic example of a GDF file, in a first part it defines the nodes and in a second the connections:

The steps to extract relationships from a CSV file and generate a file in GDF format are:

Define the parameters for the extraction of related data

A set of parameters are defined so this converter can be adapted to different cases. We must specify what information will be taken from the file in CSV format, where we will leave the result and the graph type.

The sample CSV file can be found here.

Define the data structures for the transformation

In order to store the data, dynamic structures are needed to allow data to be added as they appear. The hash tables were chosen because they are the most appropriate for this case. Hash tables will be used to store nodes and connections.

Import data reading the CSV file and run it row by row to store the nodes and connections in the hash tables.

Sort data according to connections

The hash table object does not have the sort method, but has one to convert it into a list. Once we have converted the hash_links and hash_connections into a list, we sort them down by number of connections.

Prepare the data for the GDF format

In this step we place in GDF format nodes and links in descending order by number of connections.

For the definition of links only the source and target nodes are required, but we can also expand them with attributes. In this case we add the weight of the relation, a boolean variable to indicate if the graph is directed or not (by default it is not directed) and the attributes configured in the parameters.

Generate the file in GDF format

The last step is to write the file in GDF format. We will only have to add the headers before writing the information of the nodes and links.

The resulting GDF file can be found here, and also the complete R code is available in a standalone script.

The data has been obtained with the tool t-hoarder_kit, which allows downloading data through the Twitter API. With it, a query of the tweets that mentioned the @rstudio profile has been made. From the data downloaded in CSV format, the most relevant columns have been selected to facilitate the visibility of the tables. 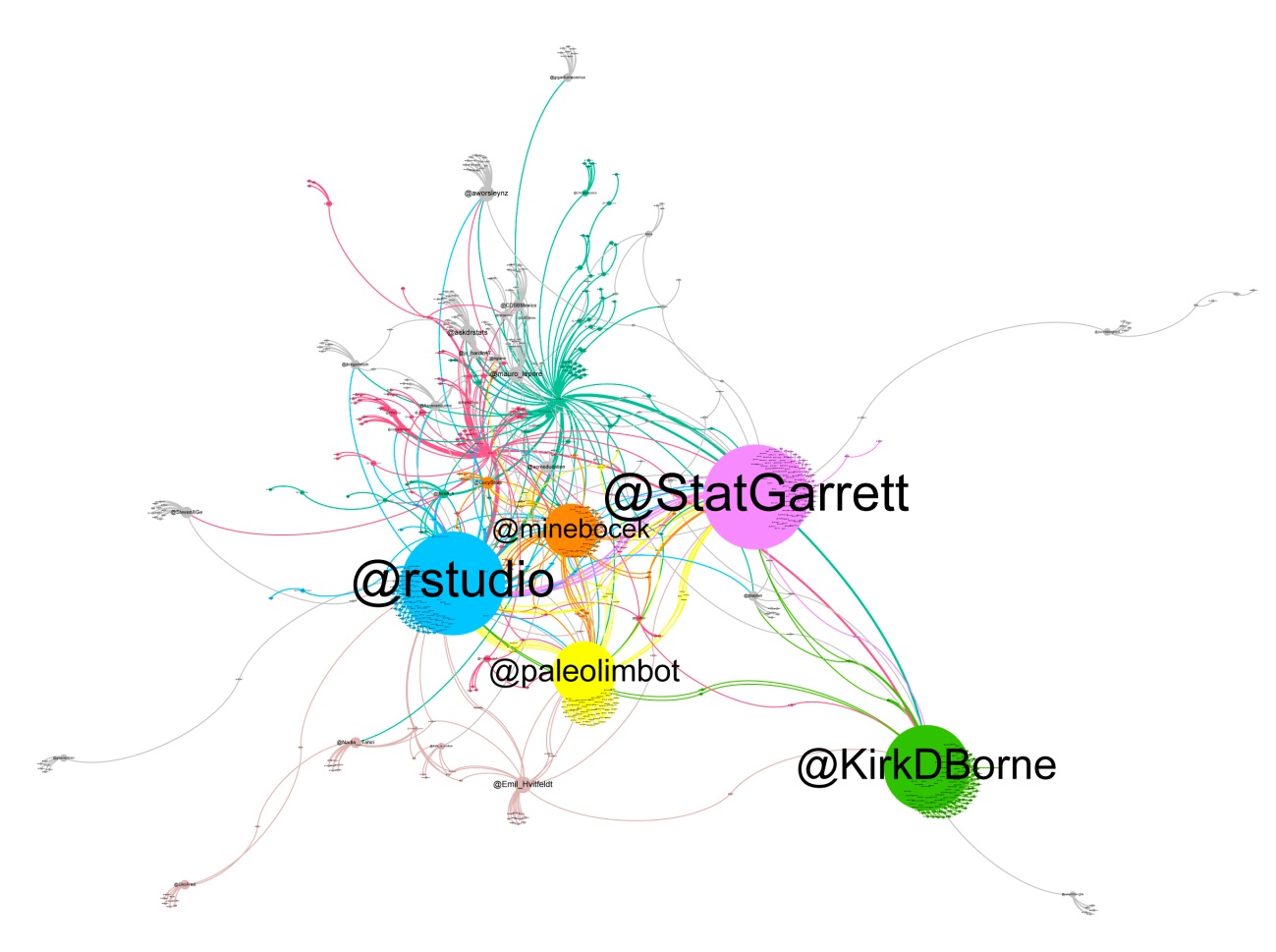